those of you who are also my Facebook friends will remember I was trying to rescue tadpoles this week.

It came about as I had decided to relocate my water lily plants from a fibreglass pond in a garden, to a large pot.  As my husband was the one who drained the water into plastic tubs I was unaware of the tadpoles until he told me there were wiggley things in the bottom of the old pond.

On investigation I discovered the wiggly things were tadpoles and quite large ones too.  We mostly have little grass frogs nearby and in the 10 years that pond had been there this is the first time there have been tadpoles. 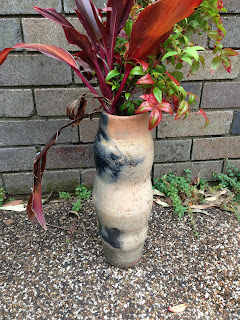 This pot was part of a water feature with the old pond, now full of water I am hoping the Nandina and the red leafed plant (name of which escapes me just now), will start to get roots so I can replant them in the garden.
the pot was thrown in two parts, joined and decorated with terra sigulata slip before being pit fired.

Now my concern for the tadpoles is that in the old pond they could have just hopped off into the garden once they had turned into frogs.  Not so easy from a large pot.

There normal habitat outside my fence has dried up in the last month so no chance to return them to the wild at this stage.  The best I can do is give them a stick to climb up and hope for the best. 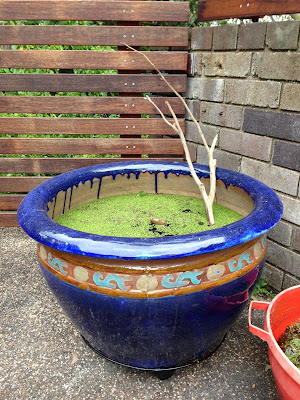 the water lily pot is a commercial one and probably imported but was purchased from an Australian company.  I'll have to top up the water slowly so the leaves can grow and float on top.

Not much on my own clay work this week so hop (pardon the pun) over to Mud Colony and see what other potters have been up to...
Posted by Anna at 8:57 pm