This week has seen the completion of the soft clay part of my project completed with 90 individual pieces pressed moulded.  Each of those 90 is made up of two pieces and then details are applied and a metal loop inserted to allow each one to be suspended.  They are suspended during the glaze firing which allows glaze all over and will be fitted with jewellery findings and suspended again for presentation.


When I glaze fired the last batch I ran out of space on my bead racks so decided I had better make another one.


I have found that the slab built type takes up less space on the shelf while allowing for a double row of suspended pieces.

the ones I made originally didn't support the wire well enough (it softens at the high temperatures) so this one is a little longer overall but has a support in the centre...

Slabs are tricky when you don't make with them on a regular basis... I've managed to bend them a bit so I hope they don't bend any more in the firing. 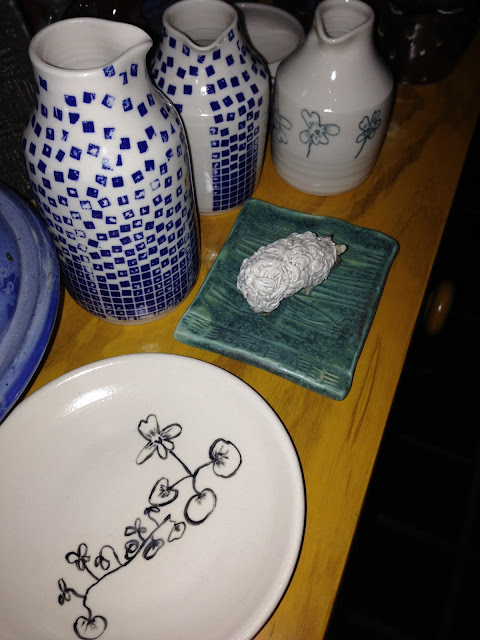 These pots have come through the last two glaze firings and I should have them ready for sale with the Port Hacking Potters Group on Thursday 25 February at Sutherland Hospital in the foyer from 9am if you are in the area. (ready for sale means their bottoms smoothed and then priced and listed).


We have had a relatively wet summer this year which makes a nice change from the past drought years.  The garden has gone crazy and the wall outside my studio has become a living wall installation... where did those ferns come from?  We haven't grown any fishbone fern for years. 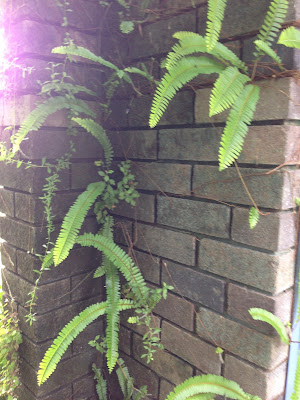 the joys of mother nature, wonderful

Love the white plate with the flowers :-)

thanks Dawn... I'm inspired by all the native violets around our garden :)