The joys of lids

My glaze firing this week included two commissions and teapots for the teapot show. 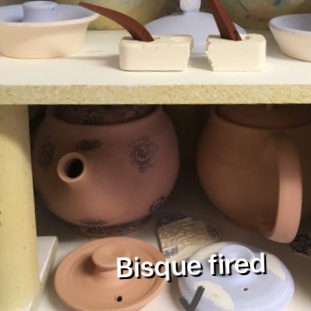 They all came through the bisque firing OK.  The lids are fired on the pot to ensure any movement affects both the lid and the body in equal measure to allow for a good fit.

The same for the glaze firing.

However if glaze meets glaze you have a stuck lid so I use cold wax to resist the glaze around the lids and the gallery they sit on... so far so good right?

You would be surprised at the tiny amount of glaze it takes for the lids to stick --
fortunately a small amount in one place can be solved with the use of a large rubber mallet!

Hurrah, four out of four teapots successfully made...
One is off to the Grandmother of a little girl who I hope will like it as much as her cousin likes hers and the other three are destined for the Sydney Teapot Show being held at the Kerrie Lowe Gallery in Newtown from 24 August to 16 September 2018.
Posted by Anna at 7:38 pm

yeah for success, what are the lids sitting on the shelf - spare ones ?

Thanks EC... hope the teapots find new homes at the Sydney Teapot Show

Hi Linda yes they are spares, just in case, lids can be tricky things. Of course you can then end up with lots of spare lids!