First firing and the Matchbox Show

As is often the case with potters, I haven't posted for a while as I've been busy making!

I fired my first bisque firing and all went well:


I then prepared for my first glaze firing and was very conscious of the deadline for an exhibition and wanting to leave time to refire if needed...

The bisque firing showed that the lower shelf could be hotter than the top shelf.  I also wanted to include more jewellery pieces in the glaze firing so packed it differently.


Hind sight is a great thing and inspite of being told by more experienced potters I should either put 'setters' under my glazed pots or at least put kiln wash on the shelves I hastily went ahead and of course for the first time ever the glaze ran.  I also upped the temperature higher than the suggested schedule of the kiln maker.  Ah we live and learn from our mistakes...

As it is I have a half kiln shelf that is damaged.  I may be able to clean it up but won't know until I try and I'll be sure to get some kiln wash before doing another glaze firing.


Fortunately all my work for The Matchbox Show's Fifth Anniversary Exhibition is fine and now on its way.

Here is a preview 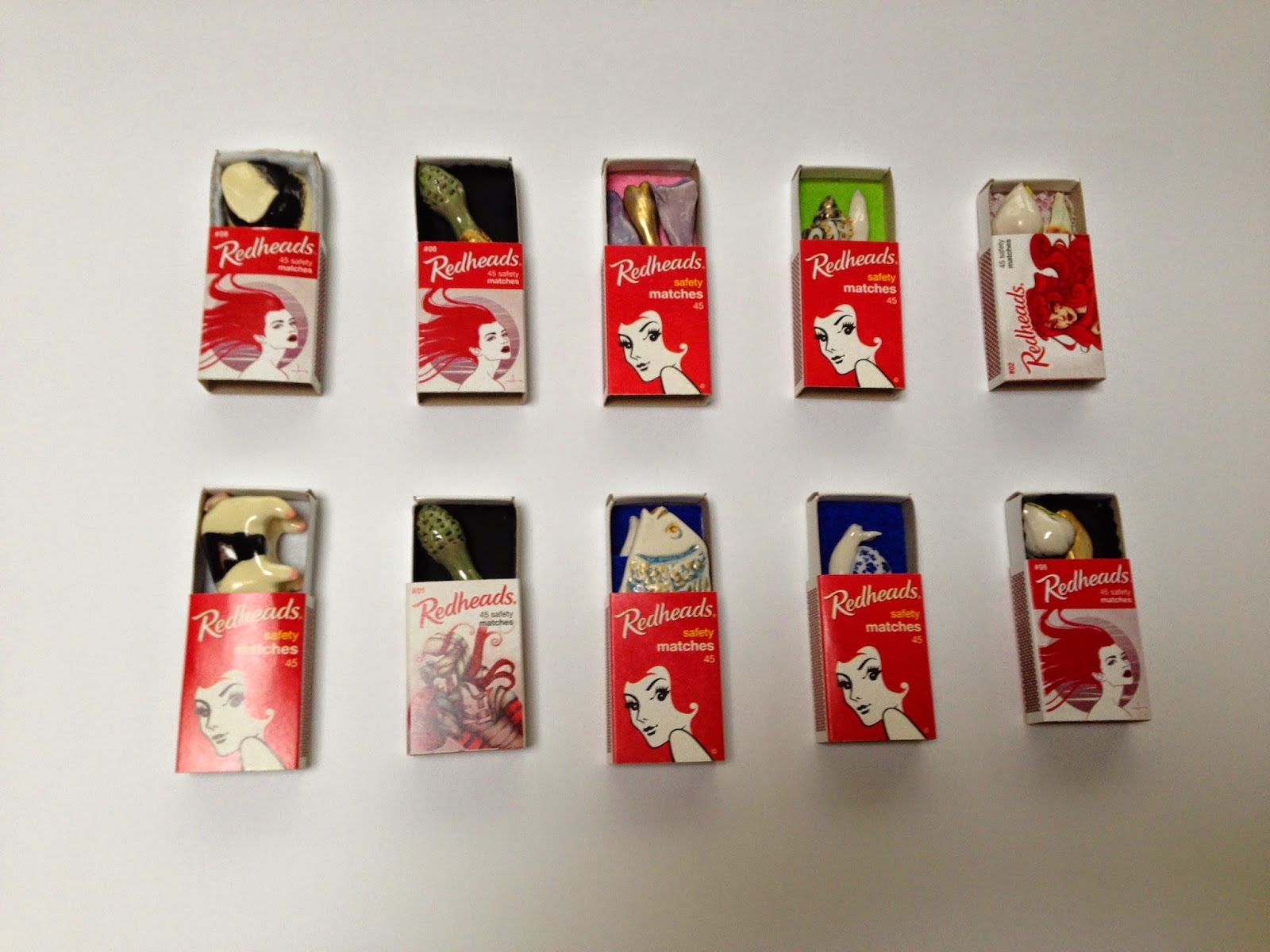 A mix and match of ideas, all in Keanes Porcelain and some embellished with gold.

If you are going to be in Brisbane between the 10 - 21 March 2015 then I hope you will call by the gallery and have a look at the show.  I am thrilled to be included with some amazingly creative ceramic artists from across Australia.. 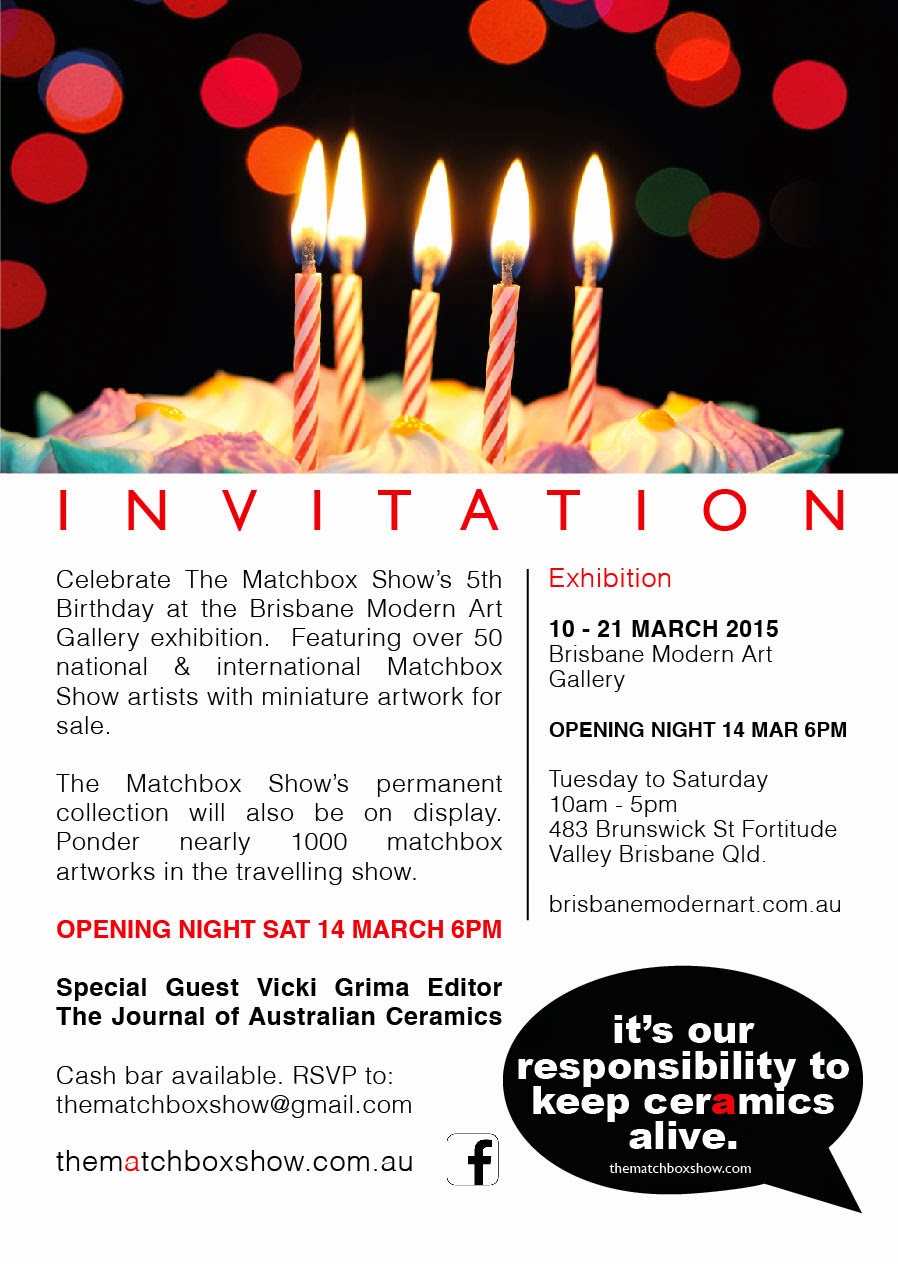 Poor pot! It is such a PITA when that happens!
You can clean up your shelf. The best thing to use is a surface grinder. I rented mine. I think the one I used was rated for concrete. Be sure to do it outside and wear goggles.
Your Matchbox work looks wonderful. What a great idea for a show!

congrats on the show your work looks beautiful, sorry about the glaze run

Hi Smartcat thanks for your suggestions on the shelf. My husband is a very good handyman and has an anglegrinder if needed but I am hoping a hammer and chisel will do most of the work and I will certainly be wearing goggles. It is a shame I won't be able to get to see the Matchbox Show in person as it is in another state, however I'm hoping friends and family may get to go along. It is a great idea.

Hi Linda
thank you - both for the compliment and sympathy :)
I'm already planning the next firing so the run has not put me off...
I will be more careful though...

Hi Anna,
Congratulations on your first firing of the new kiln. The kiln and the work in it look lovely. Sorry about the glaze run... I did something similar to a new shelf a couple of years ago too! I had put a coat of kiln wash on that one, but had put it on too thin...

Hi Peter
It was a case of Murphy's Law! I've used this glaze combo many times before and its never run.. ah well live and learn.. glad I'm not the only one. Did you salvage your shelf? Haven't tried to repair mine yet...

Aww. At least all your other creations came out beautifully.

thanks Caroline :) I have bought some kiln wash for my shelves and started on the next firing - hopefully lesson learnt!

That always seems to be the way, no matter how well you plan something is likely to go awry just when you have a deadline to meet.
Congrats on the show.

Hi Lori
Yes our craft doesn't like to be rushed does it :)
I'll be posting more about the Show as it opens...