During the week I received my copies of the invites for the Sydney Teapot Show and oh my gosh I only have one teapot complete!!
One has been bisqued and one about to be so I sure hope I get them into a glaze firing very soon...

Mark your diary now - the teapots are always amazing... lots of interesting themes for makers to go wild with.... 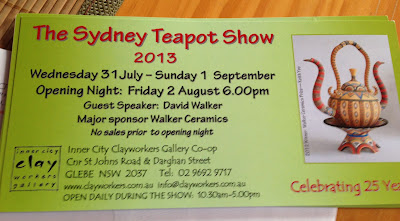 Tonight I am not long back from the opening of Woodfire 2013 a tribute to Janet Mansfield at the Kerrie Lowe Gallery in Newtown.
The opening was talk by Bernadette Mansfield and Neil Mansfield,  a moving account of Janet's contribution to the Australian and International ceramics community.

I am not a woodfirer myself though I quite enjoy the process of stoking the fire and waiting for the results, will we get flashing, will the ash form a nice glaze, etc.  This was a must see exhibition though and there was some beautiful pots on display and lots of red stickers by the end of the night.

Some fortunate person will be taking home a very large urn shaped pot by Chester Nealie that has the most wonderful greens and markings.

The other works I enjoyed were some nice beakers by Janine King with a pumice glaze which she tells me she developed as a student and recently rediscovered.

Some lovely little squared off beakers by Zak Chalmers, a green jug by Susie McMeekin and a set of pots by Len Cook.

It was also interesting to see works by Peter Rushforth which were not for sale and of course some amazing pots by Janet Mansfield herself.

An enjoyable exhibition so do call by if you are anywhere near Newtown before the 9 July.

This is my post for this weeks  Mud Colony so make sure you link over and see what else is going on around the studios.  And if you like the wider craft scene check out Artists in Blogland.
Posted by Anna at 10:30 pm