Over the last couple of weeks much of the east coast has received flooding rains... from one extreme to the other... while all the bush fires are either out or at least contained those whose homes and livelihoods were destroyed by the fires are still facing recovery.

One of my friends is bringing artists together to exhibit in a fund raiser to help. They are calling it Creative Coastal Appeal and it will be in the Ulladulla Civic Centre.
My work titled "2070" will be part of that exhibition in Ulladulla on the NSW south coast over the Anzac holiday weekend, 25 April.

If you live close by please consider attending....bring your friends and buy some art for a good cause.

EDIT: The show in Ulladulla was postponed indefinitely due to restrictions caused by the fight to limit the Corona Virus.  Fortunately, prior to this my friend took "2070" to another fund raiser at The Ivy Hill Gallery further down the coast where it sold.  So happy the bush fire affected potters I nominated will get the funds. 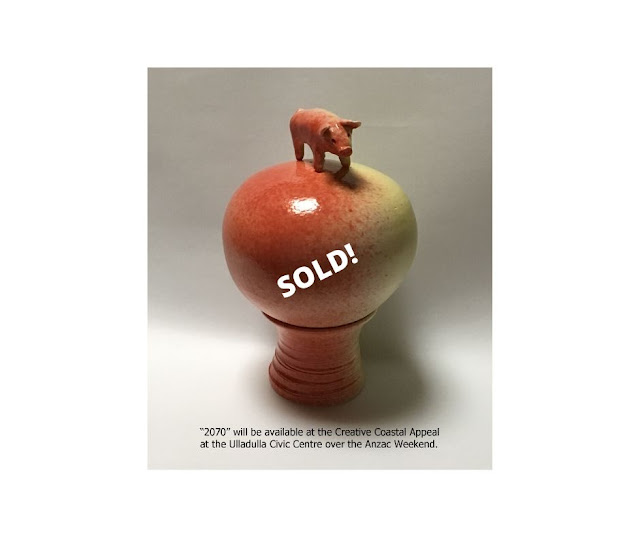 It is a most excellent cause and I hope sales are beyond good.
We had some rain. A fraction of what was predicted. Our fires are under control (yay) but the numbers of water bombers still going back and forth suggests that they believe that control to be precarious.

Thanks EC.. just checked the Fires Near Me app and yes still fires burning to the south of you and in the Monaro district... contained but not out. Hard to believe when the coast has had flooding rain.