It has been a sobering week for me.  NSW Blue Mountains are just to my West about an hours drive and a large part of them were subject to bush fires this week and although no longer threatening houses the fires are still burning.  See this link for more details: http://www.abc.net.au/news/2013-10-25/firefighters-in-control-as-blue-mountains-bushfire-threat-eases/5044770

We had some unusually hot windy days for October resulting in total fire bans but the fires were already a problem.  While my friend Sadhana was being very calm about it all,  it must have been of great concern to have to pack precious things ready to flee and to prepare to stay if possible.  It is good to stay if you are fit and have a good place to shelter as the fire storm passes over.  It is often the embers from after the fire has passed that ignite the homes so if you can stay safe you can then get out and extinguish the embers before the house starts to burn.

My husband and I live close to a bush reserve and our home was singed by a bushfire in that reserve.  This was in 1994 and it was only quick action by a Rural Fire Service team and the neighbours that saved this house.  We moved in 4 months later with the damage still to be repaired as the owners selling the place obviously just wanted out.  The RFS were from out of the area and took a wrong turn.  They were heading for the other side of the main road where 100 homes were lost but they saved this street and stopped the fire spreading to surrounding streets behind us or the count would have been much higher. 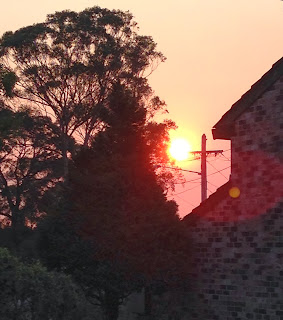 this image was taken from our verandah yesterday showing how the smoke still in the air gave an eery red glow to the setting sun.

The other event near us was the removal of 3 huge gum trees from another neighbours back yard.  These trees must have become stressed during the drought allowing them to be infested with termites and borers.  A large branch fell and narrowly missed my neighbour.  The Tree Preservation Officer from the council agreed that they all had to be removed and not just lopped.  Apparently one large branch over hanging our roof was only just hanging on as it was hollowed out inside.  Still distressing for both our neighbour and ourselves...  many times the Little Ravens have nested in those trees.  I'm sure I heard them fly over and moan at the loss the day after they were taken down. 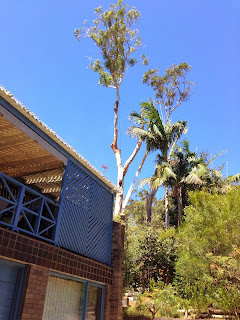 this is the last of them about to come down.  The tree loppers needed a large cherry picker to get to them.  It has changed our landscape however our homes are now safer. 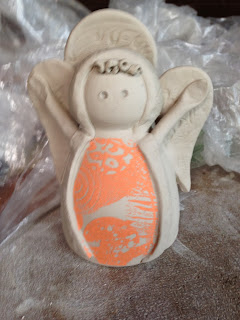 these Christmas angels are in a bisque firing and I hope to glaze them tomorrow.
Take care, stay safe if you are in the bush this summer... and some good rain would be nice :)

Stay safe Anna, I can only imagine how worried you must be, but know that even here in Canada, we're thinking of you there.

Stay safe Anna! I hope that you get rain soon!

Hi Brenda
Thanks for your good wishes, we have some cooler weather today and some cloud so hoping they drop some rain. At least our bush grows back whereas I don't think your forests recover so well in Canada?

keep safe Anna, may your precious little clay angels watch over you. x

Hi Kim
thanks for your best wishes. I had fun making those and might be making more :)