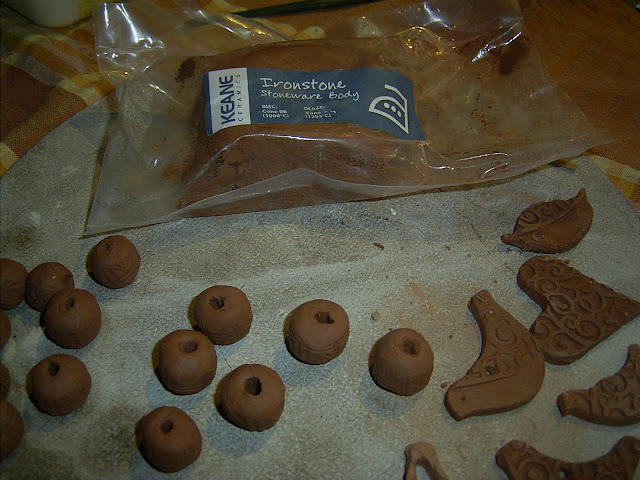 The other week I attended the Keanes Ceramics Open Day at Brookvale TAFE College on the other side of Sydney.  Keanes have just released a new stoneware clay called Ironstone.

I purchased a sample (the profits were to go to a Lymphoma charity) and also watched the expert Cameron Williams throwing with it.  It is a smooth body and has a slightly purple tinge to it.

Just the thing for a wood firing I think so I have made a few little beads and pendants to try out when I do a wood firing next month with the other members of the Port Hacking Potters Group.

If I'm not too late I'll be adding this post to the weekly spot over at Mud Colony and don't forget Mud Colony on Facebook now!
Posted by Anna at 9:10 am

Looks like a nice clay body Anna, it will be interesting to see your results. I love the textured pendants, lucky you with the wood firing facilities.

Hi Kim, yes, I'm starting to get excited about the wood firing. I arranged it with the local TAFE college as the kilns that Port Hacking Potters have are stuck in a slow renovation of the building they are housed in and not available. Disasterous with a competition coming up in September!

Can't wait to see the results of the clay when fired! What cone will it go to?

Hi Marian
We are hoping for at least 9 maybe a 10. Wood and conditions permitting :^)

I love red clay, messy to work with but warm and comforting. The beads look great! Love the texture! Can't wait to see the finished results!

Hi Brenda as you say can be messy (especially for throwing) I'll be posting photos of results in a few weeks time ;^)