My friend, Adriana Christianson, posed the question, do you remember the first piece you made?

Well yes, I do, and like Suzi over at The Smart Cat I still have that funny little pot. When I first learnt to throw on the wheel back in the early 1980s,  I was living in Papua New Guinea and went along to a Co-op at the University where a clay studio had been set up to help local potters learn Western methods.  I was given a demonstration, a few balls of clay and told to 'see what you can do with that'.  Well after a few false starts this is what I managed to produce and the lovely encouraging women there even fired it for me.  It has followed around over many house moves back in Australia.

My next 'first' was a hand building night class back in Australia in the mid '80s
I think my first interest in clay came about when I was a baby :^) when I realised someone with the same name as me had made a living from working as a studio potter.
These are collectables now though very kitch they do have a certain charm - a little ash tray (do they still make those?) by Studio Anna circa 1950s - 1960s.  The 'Aboriginal' design would also be politically incorrect now. Don't forget to check out Mud Colony and maybe say hi on one of my Facebook pages, Anna's Aussie Ceramics (Group Page) or my Artist Page - Anna's Ceramics... 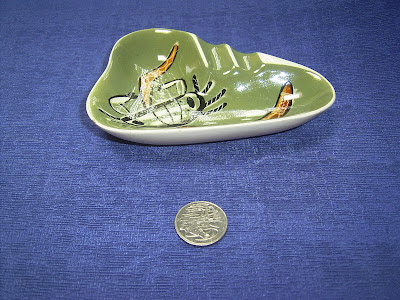 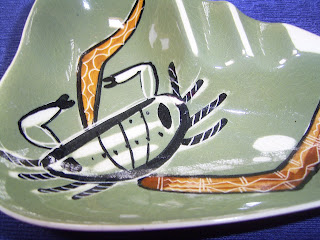 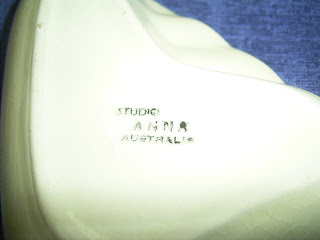 Not Bad! Isn't it odd how we keep what is important to us, without necessarily knowing its importance?

and here I am years later still striving :^) sometimes I think if it had come easily I would not have got back into it ;^)

Great post! I'm getting worried now about sharing my first pot! Yours is quite nice as well! I really love your aboriginal bowl!

Hi Brenda, ah but you can't see the hole in the middle of the base, it would make a good flower pot! ha ha!
Yes those Aboriginal themed designs from that time were lovely.

How wonderful that you have some of your first pots and love the story behind them too.

Hi Linda, thanks. And my mother inlaw still has some of my very first wonky bowls! Bless her :^)